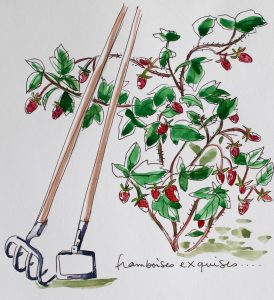 What an unforgettable pleasure to discover their red fruit under the green of their generous foliage! Rather expensive on the market, raspberries are quite easy to grow, so why not grow them yourself ? Not really predestined for our vegetable gardens in cities, they grow spontaneously in all mountainous regions of Europe, such as in the Alpine or Vosges mountains in France.

Until the seventeenth century, the varieties were few. La Quintinie, the head gardener of Louis the fourteenth,  speaks only of three kinds of raspberries: the common variety with red fruit, the one with white fruit, and the raspberry of the two seasons. Therefore , it already indicates to us that raspberries were still giving fruit twice a year at that time. Indeed, the pleasure is renewed for these raspberry plants which offer their fruits for the first time in June or July and then again in September.But the development of the cultivated raspberry will occur only in the nineteenth century in the Paris region, particularly, in its eastern part. It develops special raspberries, in the shape of a thimble, as well as the “black” and the “royal” raspberry, in large elongated fruits.

Their  thorny stems, however, remind us that they are part of the rosaceae or other invasive bush brambles. These shrubs require pruning in winter or early spring before the buds open, preferably should not exceed one meter and a half. It is recommended to cut the dry twigs at the base and to fix the young sticks between two strong threads at least eighty centimeters apart.  Therefore the plant would be ventilated by letting the air and the light filter out. As they bloom late in the season, frost does not affect them.The more the raspberries are exposed to the sun, the more they will be generous. However, they do tolerate semi-shade and appreciate  rich soil. Giving them compost once a year is a guarantee of success. One more precaution: to prevent weeds from competing with their roots, that remain on the surface, it is better to mulch them before sunny days.Did you know that raspberry leaves can make a herbal tea? Latecomers who have missed the harvest can always console themselves with this feel-good drink. They provide many benefits, especially for pregnant women, with their abundance  of minerals , antioxidants and vitamins. So green leaves or red fruits, do not resist the charm of raspberries !