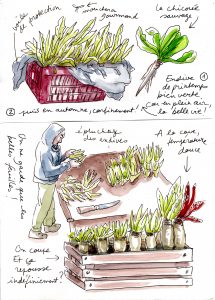 How can you imagine that the endives, so pale with their leaves barely edged with yellow, have one day become as green as lettuce? And yet, in a first life, they looked like big dandelions, growing in broad daylight in spring and summer. The chlorophyll gave them their green and crunchy appearance like any salad. This is also the only period of their life when the sun is necessary for them. Then it’s the other way around. The less light, the better the endives.

Indeed, the cycle begins in May when the gardener sows. The first step is to let the endive grow in the ground because this vegetable is above all, a root from the same family as chicory or beets, even if its shape reminds you of carrots. It must then be left to grow without too much care for four to five months. Then, when the taproots are strong enough, the leaves are cut three centimeters above the collar (above the surface of the soil) . Once the endives are dry, or as the gardeners call it, “soaked up”, they are transplanted in November into slightly damp soil placed in boxes intended for the cellar. The main thing is to avoid natural light and the photosynthesis that created the chlorophyll. It is indeed the chlorophyll that changes the color of the leaves as well as its taste. This is why the endives are also covered with a blackout fabric. The ideal is to store them for eight days in a cool place around four degrees to allow the root to heal. Watering is as important as the lukewarm temperature that reigns there. The picking can then take place as the regrowth progresses throughout the winter. We cut and it grows again, again and again.

Who invented the endive ? One says that it is thanks to the head gardener ‘s Mr. Bréziers’ forgetfulness in Brussels around 1850, that the endive was created. Therefore when he discovered his forgotten endives at the end of his cellar, he did not recognize them. Their leaves had whitened and lengthened. Their taste had almost lost their bitterness. And everybody was crazy about this. So he called them “Witloof“ which means in Flemish: white leaf .

Later on,  one improved this ”etiolation ” (or withering away ) technique by growing them tightly next to each other, in order to make the leaves more flavorful. Some endives of a red color, called  Trevise or Verone are vey appreciated by our Italian neighbors .

Nowadays, it is still in Northern France where we call them “chicons” that they are mostly cultivated, thanks to the mild temperatures, not too low, and not too high. That’s the way endives are, even lock-downed, at least living in a nice temperature.