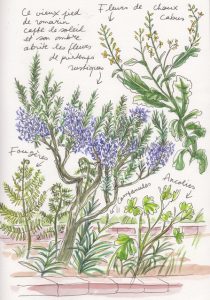 Who hasn’t heard of the famous Hungarian water, perfume, made with rosemary, rose water and orange blossom? This recipe for beauty and health would have enabled Queen Isabella of Hungary to regain at the age of 72, strength and beauty. So much so that the King of Poland would have asked her to marry him. Even if it is a legend created by perfumers from Montpellier, the revitalizing virtues of rosemary have indeed been confirmed.

Indeed, we recently discovered its powerful antioxidant properties. Some doctors add that rosemary would be the ideal tonic plant to treat the weak points of old age such as memory loss, rheumatism or senility. So why not cultivate rosemary to put its benefits at your fingertips?

Rosemary, which is part of the lamiaceae family, grows wild in the Mediterranean basin where it adapts to calcareous, light and infertile soil.Its woody stems are covered in leaves reminiscent of evergreen pine needles, green above and silver below. It is at the end of winter between February and April, that its clusters of small blue flowers appear in the upper part of the branches. The insects then feast on these first melliferous spring flowers.In this drawing, my old rosemary stalk provides shelter for the charming spring flowers, columbines and bluebells, which without its welcoming shade, would never have settled in this sun-drenched square.This perennial, although Mediterranean, adapts well to the regions of Northern France. It will therefore not be useful to cover it with a wintering veil like the olive trees. But beware! Rosemary does not tolerate excess humidity and prefers a sunny position. Maybe one day you will see on its branches a small beetle with a shiny shell adorned with green reflections with fine black stripes, called leaf beetle, very fond of its leaves. To get rid of this beautiful pest, think of washing it with black soap which is a perfect curative treatment as well as the Bacillus Thuringus very efficient for the dead prune boxwood. Cutting rosemary is child’s play. In spring, a twig of about 15 cm or 6 inches will take root very easily, provided it stays in the shade. You will be able to give them as a gift to all our elders. And why not offer them a drink wishing them health and long life? And if they are not convinced of the benefits of this elixir of youth, they can always pick a sprig to flavor grilled meat or fish!