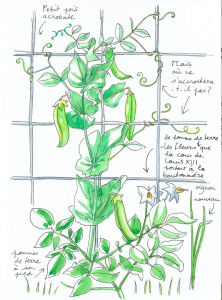 Did you know that before being small and green, the brown peas had fed men and animals since the Neolithic era in order to survive the harshest winters? In fact, easy to produce and well kept in a dry place, it is the best food to face periods of scarcity as its nutritional power surpasses meat. The pea belongs to the “fabaceae” family, like lentils or beans. Its destiny changed when in 1660, a daring cook named Audigier offered peas, still green, and in the middle of January, to the Sun King. And as it was the fashion in Italy, they loved it. This is how, from a subsistence vegetable, it has been transformed into one of the most refined vegetable at that time. Madame de Maintenon amused herself by writing about the pea madness: “The impatience to eat it, the pleasure of having eaten it, and the joy of eating it again, are the three points that our princes have been discussing for four days”. Immediately after the gardeners set out to cultivate the peas on warm beds (culture technique). Oh, marvelous ! The “primeurs“ or vegetables arriving one season ahead were born. These prodigious harvests were admired throughout Europe. In addition, peas had the advantage of being deliciously tender like asparagus or figs. These products were favored by noble gourmets because it did not need any active chewing.

The pea then became more democratic in the 19th century, when Nicolas Appert created canning, which allowed vegetables to be preserved by sterilization. He inaugurated glass bottles and then the first tins heated to 90 degrees. Subsequently, production of the small peas intensified on the slopes of the Seine in the Paris region.

But back to its culture. The peas that are sown in the ground in March. Their liana stems reach, from twenty-five centimeters to two meters. It all depends on the variety: “dwarf”, “semi-dwarf” or “oars” (climbing peas). Its seedlings do not need fertilizer because their cultivation enriches the soil, thanks to certain bacteria that have the ability to fix nitrogen. The alternate leaves are composed of leaflets whose extremity allows its to cling to the trellis or the fence. Some gardeners replace it with well-forked hazel branches.

Reading an issue of Rustica, the famous garden magazine from 1950, I learned a new gardening term: “topping”. It means pinching the stems above the third flower in order to advance the formation of the pods by about fifteen days. As for its “papilionaceous” flower, it perfectly imitates the orchid whose purple veinlets are of the greatest effectBut to come back to the evolution of the pea over the centuries; when did the pea become small? When we found a sub-variety whose soft pod’s skin, called “the parchment”, made it perfectly edible. It then took the name of “gourmet peas” or “snow peas”. In 1950, a gardener could easily harvest, before the morning dew dispersed, five to eight kilos of peas an hour. It is of course a big crop, and not a small personal vegetable garden, but what productivity!