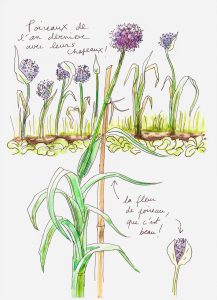 Everybody knows the typical form of leeks but who knows them in full bloom? If you would like to transform your vegetable patch into a remarkable garden, why not plant them among tulips and daffodils? With their splendid  globe-shaped umbels, they would very well liven up  spring flowerbeds. On the top of that, the leeks’ blossoms, which appear in the second year of cultivation, as they are biennnials, will produce seeds for the next vegetable generation.

Thus the leeks are part of the alliacees family, a close relative of garlic and onion. Botanists found the early form of leeks in the vineyard in the south of France .This wild leek  be transplanted in a perennial vegetable garden.

The region of Rouen, in the nineteenth century, carved out a reputation for improving leeks. They obtained : the “Gros Court de Rouen” which would then become “the Monstrous of Carentan”, or the king of leeks, then the selection will continue with the “Long de Mézières”, “d’Elbeuf”, “de Gennevilliers”, “de Saint Victor”, “Bleu de Solaise”, “Gros Long d’Eté”, “Jaune Gros du Poitou”. All named in 1925 in the Vilmorin catalog. But I am not sure to be able to find them in the official catalog!

The plant is sown in early spring under a protective cover and when it reaches the size of a pencil, it can be delicately transplanted.

The leek likes the rich, deep and cool  soil well in the sun. It remains the sentinel of the vegetable gardens throughout  winter because it does not fear frost nor cold but only a terrible little fly, the leaf miner coming from the  outskirts of Russia. To avoid them, one has to provide a net with tight mesh.

When I was preparing the publication of my book on the King’s vegetable garden in Versailles in summer, I sketched the “ceremony of the net”. It took no less than eight gardeners to extend and place the net above the vegetable patch without leaving any space where the fly would have flown in. It was quite a show. So let’s no longer sulk with leeks, which now have won their _letters of nobility _ not only in the garden, but also at the tables of the great chefs, in particular the young leeks, delicious in spring. 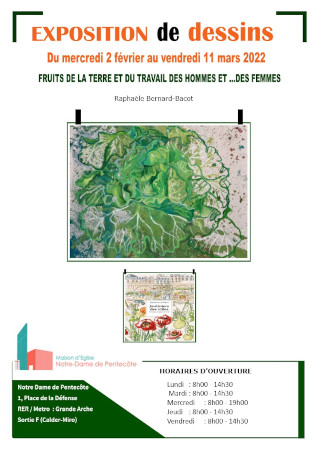